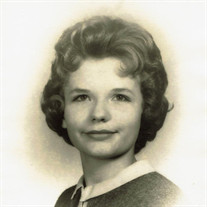 Mrs. Barbara (Bobbie) Smith Edge of Fairburn passed away on February 7, 2022. Bobbie was the co-owner of Bob’s Tire and Recap in Fairburn. and the daughter of the late James Robert (Bob) and Mary Anderson Smith . She was preceded in death by her son, Anthony David Edge and is survived by her husband of 57 years, Owen D. Edge, III; sons, Owen Edge, IV of Gainesville, GA; Robert Edge of Fairburn; sister, Judy Smith of Johns Creek, GA; brother, Jim Smith and his wife, Beth of Rico; sister-in-law, Fann Edge Woody of Columbus, GA; brother-in-law, Jim Edge of Albany, GA; nieces and nephews. Bobbie was a devoted Daughter, Sister, Wife, and Mother. She was the “Back Bone” of the family leading at every turn. Bobbie was active member of Rico United Methodist Church serving as Treasurer, teacher, Organist, and she created the stained glass windows for the church. She remained actively involved in all aspects of the church throughout her life. Bobbie collected angels, salt and pepper shakers, butterflies, and cardinals. She was a gifted artist in a variety of mediums, including making dolls, stained glass, sewing, crocheting, painting, ceramics, macramé, latch-hooking, and many other crafts. It is hard to think of a craft she had not mastered. She participated in art shows across a wide variety of crafts and mediums. A Celebration of Life Service for Bobbie will be held at a later date. In lieu of flowers those desiring may make donations to Rico United Methodist Church, 6475 Rico Road, Palmetto, GA 30268. Those wishing may sign the online guestbook at www.parrottfuneralhome.com.

Mrs. Barbara (Bobbie) Smith Edge of Fairburn passed away on February 7, 2022. Bobbie was the co-owner of Bob&#8217;s Tire and Recap in Fairburn. and the daughter of the late James Robert (Bob) and Mary Anderson Smith . She was preceded in death... View Obituary & Service Information

The family of Barbara (Bobbie) Smith Edge created this Life Tributes page to make it easy to share your memories.

Send flowers to the Edge family.