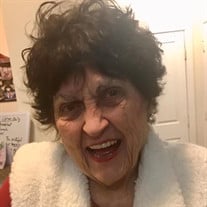 Barbara Nell Christian Brown (95) was called Home to her Eternal Sabbath in the Lord on 8/2/2020. She was born 2/2/1925 to John & Marian (Thompson) Christian and was a life-long member of East Point United Methodist Church. Her family history goes back generations holding public offices in City and State. When Barbara was a young teen she was chosen to meet President Franklin D. Roosevelt making the cover of Time Magazine (40s), and she later became a speaker at “The Little White House” in Warm Springs. She attended Russell High School and Georgia State. Barbara sang opera and played trumpet with the Atlanta Symphony Orchestra, and was a member of the “acclaimed hit” Georgia State All-Girls Military Band, a first of its kind. Barbara was preceded in death by her WWII love story and paratrooper husband of 34 years, Robert K. “Bob” Brown, Sr. (54), and their son Robert K. “Bobby” Brown, Jr. (34). Following their lead on City Council, she was elected and served the City of East Point for 8 years as Councilmember and at one time Mayor Pro Tem. She often opened the meetings singing “God Bless America” in her Kate Smith style. Barbara continued to stay active in her community in various capacities. She sang as the Olympic torch passed through the City of East Point, and later with the Olympic Choir. “Babs” was a longstanding member of not only her church choir, but of the Sweet Adeline’s, being past-president of Taraland Harmony and Song of Atlanta who received high honors in competitions. She loved volunteering annually for the Yaarab Shrine Circus for children. Holding various jobs, Barbara is remembered by many for her substitute teaching and love for the students at Headland High School. Her family and friends will miss and remember her for her devotion to Christ and His Church, her family, hospitality, city, country, singing, her out-going and funloving and joyful personality, love for all people and animals. She was a wonderful Mother and Grandmother. Barbara was loved by many, and she never met a stranger. Barbara is survived by her 3 daughters Cathy (Tony) Stepleton of Newnan, Cindy (Terry) Peppers of Newnan, Chrystie (Mark) Moody of Cumming, her beloved grandchildren Tara (Jay) McInvale, Dusty (Ashley) Peppers, Audrey (Tom) Newberry, Caroline (Austin) Davis, Olivia (Tim) Woodring, and her 10 darling great-grandchildren. Due to the covid pandemic, her earthly body will be laid to rest next to her husband and son after a graveside service with family at Forest Lawn Memorial Gardens Saturday, August 8. Donations may be made in memory of Babs to Shriner's Hospital for Children, P.O. Box 1525 Ranson, WV 25438.

Barbara Nell Christian Brown (95) was called Home to her Eternal Sabbath in the Lord on 8/2/2020. She was born 2/2/1925 to John & Marian (Thompson) Christian and was a life-long member of East Point United Methodist Church. Her family history... View Obituary & Service Information

The family of Barbara C. Brown created this Life Tributes page to make it easy to share your memories.

Barbara Nell Christian Brown (95) was called Home to her Eternal...

Send flowers to the Brown family.