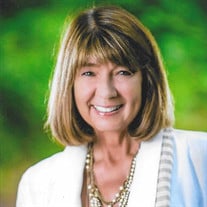 CHRISTINA KNOX ASMUS ABELL passed away on February 1, 2021 in Peachtree City, GA, following a brief illness. Chris was born April 16, 1952 in Carlisle, PA, to Grover W. and Sallie Mae Holman Asmus. She was the granddaughter of Julian Knox and Margaret Steagall Holman of Ozark, AL, and Grover E. and Josephine Asmus of Bergen, NJ. She grew up in Montgomery, AL, and attended the University of Alabama before graduating from Auburn University at Montgomery with a Bachelor of Arts in English and a double minor in Accounting and Business Management. In 1991, she married Dr. John Bruce Abell of Springfield, KY. They had two sons, Jonathan and Collin, and were later divorced. She was an active member of St. John’s Episcopal Church in Montgomery, until moving to Peachtree City, when she became an active member of St. Andrew’s in the Pines Episcopal Church. Chris was devoted to raising and supporting her sons. She had shining eyes, a bright smile, and a remarkable sense of humor. She was patient, caring and affectionate to everyone, especially her family. Chris is survived by her son Collin Andrew Christian Abell of Peachtree City, GA; her brothers Grover E. (Barbara) Asmus II of Mobile, AL, and Darin (Carole) Williams of Richmond, VA; her uncle Henry S. (Janice) Holman of Folsom, CA; her nephews Jeffrey Collin (Laurel) Asmus of Hingham, MA, and Shelley Collinsworth (Kenda) Asmus of Lucedale, MS; her niece Kinion Lynne Asmus Pond of Sewanee, TN; and several grand- and great-grand- nieces and nephews. She was preceded in death by her grandparents; her mother Sallie Mae Holman Bruchac and her father Col. Grover W. Asmus; her uncles Julian Knox Holman, Jr., and Porter Collinsworth Holman; her sister, Kinion Lynne Asmus, who died in childhood; and her son, Jonathan Cyril Abell. A memorial service will be held at Saint Andrew’s in the Pines Episcopal Church on Wednesday, February 10, 2021 at 1 PM. The Reverends Amanda Musterman and Paul Elliott will officiate. To honor Chris and her service to God, the family requests that donations be made to Saint Andrew’s in the Pines Episcopal Church, 316 North Peachtree Parkway, Peachtree City, GA 30269.

CHRISTINA KNOX ASMUS ABELL passed away on February 1, 2021 in Peachtree City, GA, following a brief illness. Chris was born April 16, 1952 in Carlisle, PA, to Grover W. and Sallie Mae Holman Asmus. She was the granddaughter of Julian Knox and... View Obituary & Service Information

The family of Christina Knox Asmus Abell created this Life Tributes page to make it easy to share your memories.

CHRISTINA KNOX ASMUS ABELL passed away on February 1, 2021 in...

Send flowers to the Abell family.