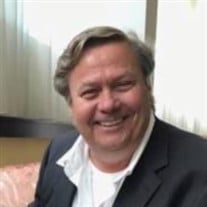 Clifford “Garry” Heget, Co-Owner of American Eagle Construction, former Co-Owner of Black Jack Motorcycles and resident of Peachtree City, Georgia for 26 years passed away on Monday, October 18th, 2021 at the age of 62. Garry is preceded in death by his parents Clifford Clarence Heget, Marion Rose Heget and his sister Marion Provitera. He is survived by his daughters Kelsey Heget of Tampa Florida, Hayley Heget Roberds and her husband Blake Roberds of Peachtree City Georgia, his sister Doris Pence and her husband Tom Pence of Ponte Verda Florida; Mother of his daughters, Gail Fox; and his best friend and business partner Billy Whelan. Garry was born in Hoboken, New Jersey on March 26th, 1959. On June 4th, 1991 and March 2nd, 1995, he welcomed his two daughters whom he loved dearly. Garry was a devoted father who loved life. He enjoyed bike rides on his motorcycle in the mountains, rides with his Golden Retriever Jesse in his Polaris Slingshot, volunteering and helping within the community and his church. He always loved being involved in his daughters lives and all of their activities. He had a passion for his work at American Eagle Construction and never found a job he could not handle. He was a Godly man, and was always involved in his Church. He loved spreading the word of Jesus Christ to friends, family, and even strangers. He was filled with so much joy. It was contagious to anyone that surrounded him. A funeral service is scheduled for 11AM on Saturday October 23rd, 2021 at Parrott Funeral Home on Senoia Road in Fairburn Georgia. Pastor Paul Smith will officiate. Those who wish to sign the online guestbook or who can not attend the service please visit www.parrottfuneralhome.com where there will be a livestream of Garry’s Service. Parrott Funeral Home and Crematory 8355 Senoia Road Fairburn, GA 30213 770-964-4800

The family of Clifford "Garry" Heget created this Life Tributes page to make it easy to share your memories.

Send flowers to the Heget family.