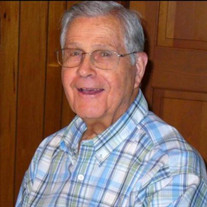 On January 3, 2021, at the age of 100, Clovis Edward “Ed” Watkins Jr. of Fayetteville, Georgia, went to heaven to be with his Lord and Savior. He was born on September 9, 1920, in Fairburn, Georgia to the late Clovis Edward Watkins Sr. and Mattie Lou Brooks Watkins. He was also preceded in death by his younger brothers Billy Brooks Watkins and Cecil Ray Watkins. He is survived by his wife of 74 years, Margie Milam Watkins of Fayetteville, Georgia; children, Brenda Bullington (Deryl) of Fayetteville, Georgia; Eddie Watkins of Jasper, Georgia; David Watkins (Patty) of Jasper, Georgia; Gary Watkins (Jennifer) of St. Augustine, Florida; grandchildren, Dave Watkins (Brandy Cariola), James Watkins, Shawn Ann Collins (Seth), Heather Stogsdill (Tom), Stefanie Couch (Ben), Amanda Watkins, Rebekah Watkins; great-grandchildren Quinn Watkins, Gracie Rae Collins, Nolan Collins, Alaina Collins; and many nieces, nephews, and other special family and friends. Ed grew up on a farm in Fairburn, Georgia, where he learned strong and honest work ethics. He graduated from Campbell High School in 1937. Ed served in the Army Air Force during World War II for three years and four months, and he received Good Conduct Medal, European African Middle Eastern Service Medal, Asiatic Pacific Service Medal, World War II Victory Medal, and American Service Medal. He was stationed in many places including Hawaii and Africa. In 1963, Ed started Watkins Lumber and Supply Company in East Point, Georgia, where he worked for many years. He officially retired in 1991, but continued to work for a couple of years. Ed was a member of the Rock Baptist Church in Fayetteville, Georgia, where he served faithfully as a deacon from 1961 until 2015, sang in the choir, and oversaw building additions to the church. He met his wife Margie at the Rock Baptist Church, and they were married on June 28, 1946. They raised their four children in Fairburn, Georgia. He always loved spending time with family. He was a devoted husband, loving father, and caring grandfather. He was affectionally called “Daddy Ed” by his family, and he will be greatly missed. He enjoyed watching the Georgia Bulldogs, Atlanta Braves, and NASCAR racing (especially Bill Elliot). He also enjoyed gardening, listening to gospel and country music, taking care of his dogs, eating Sprayberry’s Barbecue, fishing, singing, taking trips to Helen, and vacationing in Daytona, where he enjoyed seafood. The family wishes to send a special thank you to the staff at Heartis of Fayetteville for their care and compassion. Graveside services will be held Saturday, January 9, 2021, at 2 o’clock at Holly Hill Memorial Park with Dr. Oscar Cope officiating. The family respectfully request that everyone attending wear a mask. Those wishing may sign the online guest registry at www.parrottfuneralhome.com. Also, A video of the graveside funeral will be available following the service from the Parrott’s website.

The family of Clovis Edward "Ed" Watkins, Jr. created this Life Tributes page to make it easy to share your memories.