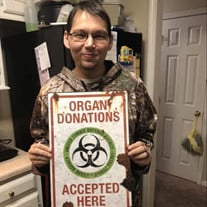 Daniel Alan Boyd, 35, of Mebane, NC passed away on November 19, 2020 after a courageous battle against his numerous medical issues. Daniel was born on October 15th 1985, to Sharon and Jacky Boyd Jr in Newnan, GA. He graduated from Newnan High School in 2005. He later spent several years working for Sygma up until he became too sick to continue working, something he longed to be well enough to do again. In 2010, he met Jessica Jeffares- Boyd and they married in 2018. Daniel proudly helped raise his daughter Kyleigh ever since meeting her in 2010. Jessica and Daniel later welcomed a son, Lucas in 2012. In 2019 Daniel came to North Carolina for the medical team at Duke University Hospital in hopes of prolonging his life via a very complicated transplant that wasn't available in Georgia. His transplant was successfully performed in 2019, but his medical complexity and severely immunocompromised status led to numerous battles that he courageously fought with inspiring determination. He overcame the odds several times the last few years but his determination and perseverance were far stronger than his body unfortunately. Daniel loved everything about cars, from racing to turning wrenches. Some of his favorite memories were of the track and racing, especially those with his long time best friend, Josh Moeckel. Daniel loved his family and greatly enjoyed spending time together. He was an avid sports fan and proudly supported Georgia Tech Football, regardless of how badly they played. Daniel is predeceased by his maternal grandparents, Lorene Duncan Hudson Smith and Winton Hugh Hudson. He is survived by his wife, Jessica Jeffares-Boyd; brother, Steven Jesse Boyd; sister Brittany Boyd; two children, Kyleigh Jeffares-Boyd and Lucas Alan Boyd; His parents Sharon and Jacky Boyd Jr; and paternal grandparents DiAnne and Jackie Boyd Sr; As well as many nieces, nephews, cousins, aunts, uncles, in-laws and friends. A memorial service will be held Saturday, December 5, 2020 at 1 o'clock in the Chapel of Parrott Funeral Home. Inurnment will follow at Oak Hill Cemetery in Newnan. Those wishing may sign the online guestbook at www.parrottfuneralhome.com. The family will receive friends one hour prior to the service at Parrott Funeral Home and Crematory, 770-964-4800.

Daniel Alan Boyd, 35, of Mebane, NC passed away on November 19, 2020 after a courageous battle against his numerous medical issues. Daniel was born on October 15th 1985, to Sharon and Jacky Boyd Jr in Newnan, GA. He graduated from Newnan High... View Obituary & Service Information

The family of Daniel Alan Boyd created this Life Tributes page to make it easy to share your memories.

Send flowers to the Boyd family.