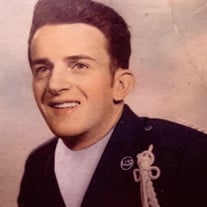 Mr. David Leroy Moore (Amos), age 75, of Palmetto, passed away August 12, 2020. He was born August 4, 1945 to the late Floyd Parker Moore and Louvale Maddox. Mr. Moore was a veteran of the U.S. Air Force serving a tour in Ipswich England. He was employed with Eastern Airlines and Northwest Airlines. After leaving the airline industry, he started his own dump truck business. There was nothing that David could not operate, whether it was a tractor trailer, airplane, heavy equipment, or a motorcycle. He was an avid motorcycle and airplane enthusiast. He was preceded in death by his daughter, Melissa Paige; siblings, Agnes Graves, James Moore, Jerry Moore, and Deborah Ledford. He is survived by his wife of 52 years, Virginia Elizabeth Norton Moore; granddaughters, Cheyenne Brittney Moore Steadham (Chris) and Rebekah Paige Cobb, and Chloe Marina Skye Moore; great grandchildren, Autumn, Grace Steadham and Jase Dwayne Steadham, and Alexander Eli Steadham; sisters, Patsy Williford and her husband, Sonny, Gloria Moore Netherland and companion, Don King; and a host of nieces and nephews. A funeral service will be held Saturday, August 15, 2020 at 1 o’clock in the Chapel of Parrott Funeral Home. Those wishing may sign the online guestbook at www.parrottfuneralhome.com. The family will receive friends two hours prior to the service at Parrott Funeral Home & Crematory, 770-964-4800.

The family of David Leroy Moore created this Life Tributes page to make it easy to share your memories.