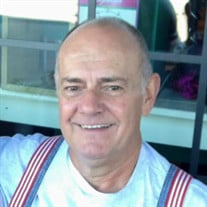 Mr. David Frederick White, age 77, of College Park, GA, passed away Tuesday, January 18, 2022. David was born on December 23, 1944 to Spencer and Juanita White in Oliver Springs, TN. While studying at Tennessee Tech for a degree in Electrical Engineering, David would join the U.S. Air Force for 6 years and would become an E-7 Master Sergeant. During his service, he would start his career of 30+ years at IBM in Knoxville, TN, where he retired. David married Judy Seiber and had 2 children: Spencer Jason White (Danna) and Tiffany Renee Plato (Michael) of Knoxville, TN. David is survived by his 2 children: Spencer and Tiffany; 3 granchildren: Michala Plato (22), Bryson Plato (17), and Raven White (7), all of Knoxville, TN; sisters: Louetta Ledford, Linda Beal and Kathy Rayl; brothers: Garner, Donnie, and Doyle, all of Georgia. He was preceded in death by his parents, Spencer and Juanita, and brother Ralph. David loved The Lord and his family dearly, and his witty humor always brought joy to those around him. Services will be held at Cedar Grove Church of Christ on Saturday, January 22, 2022 at 11am. Location: 9100 Clark Rd, Fairburn, GA

The family of David Frederick White created this Life Tributes page to make it easy to share your memories.

Send flowers to the White family.