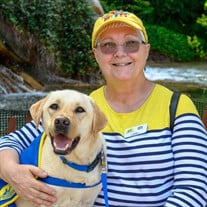 Deborah (Debbie) Lynn Mullis died on June 1, 2021 after a brave battle with brain cancer. She was preceded in death by her parents, Wallace and Mary Lynn Mullis and her sister, Pam Motter. She is survived by her brothers and sisters in law, Jimmy and Amanda Mullis, Fayetteville, GA, and Scott and Karen Mullis, St. Louis, MO; nephews and nieces, Patrick Sandiford, Rebecca Jill Sandiford, Eric Mullis, David Mullis, Sara Mullis, and Anna Mullis; and five great nieces. Debbie Mullis was a lifelong resident of South Fulton County. She attended Union City Elementary School and graduated from Campbell High School in 1969. After graduating from Georgia Southern, she taught for Fulton County Schools for 30 years at Stonewall Elementary and Paul D. West Middle School. In addition to teaching, Debbie stayed busy volunteering as a soccer coach and referee, playing softball, dancing on an adult clogging team, and organizing a student clogging team at Stonewall. She also worked on the Media Team at New City Church and was the Volunteer Coordinator for Atlanta Fest, a Christian music festival, for 30 years. After her retirement, Debbie spent her time volunteering for Habitat for Humanity, the Atlanta Science Festival, and Canine Companions for Independence. While working with Habitat for Humanity South Fulton as a volunteer, Debbie coordinated 33 house builds where she organized teams of individuals, families, and employee groups. As a former Science teacher, Debbie loved finding teachable moments for adults and children. Combining that with her love of Science, Debbie spent many hours volunteering with the Atlanta Science Festival as the Expo Volunteer Coordinator. In 2011, Debbie became a puppy raiser for Canine Companions for Independence and started raising service dogs. Debbie raised five puppies for Canine Companions over the years. Her puppies: Kix, Kaiser, Hagen, Nappers (now Buddy), and Rico have all gone on to enhance the lives of others. She became involved with the Metro Atlanta Chapter of Canine Companions and was president of the chapter until 2018. A celebration of Debbie’s life will be held on Saturday, June 12, 2021 at 3:00 at Parrott Funeral Home. The family will receive friends prior to the service from 2:00 until 3:00. In lieu of flowers, please make a donation to Canine Companions for Independence (https://p2p.onecause.com/canine-companions-diy/marian-scopa) or to Southwest Christian Care (https://www.swchristiancare.org/) in Debbie’s memory.

Deborah (Debbie) Lynn Mullis died on June 1, 2021 after a brave battle with brain cancer. She was preceded in death by her parents, Wallace and Mary Lynn Mullis and her sister, Pam Motter. She is survived by her brothers and sisters in law,... View Obituary & Service Information

The family of Deborah "Debbie" Mullis created this Life Tributes page to make it easy to share your memories.

Send flowers to the Mullis family.