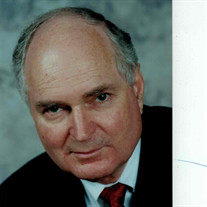 Doyle Mathis (82), of Brunswick, Georgia, passed away Thursday, April 25, 2019, at his residence, with his loving family by his side after a brief illness. He was born on May 5, 1936, in Forsyth County, Georgia. He was the son of Luster Mathis and Fay Selena Wingo Mathis. He was preceded in death by his parents and sister, Maxine Morris Kessler (Stanley). He is survived by his wife, Rheba Burch Mathis; a son, Douglas Mathis of St. Simons Island, Georgia; a daughter, Deborah Vergnolle and her husband Nasser Srouji of Tyrone, Georgia; one grandson, John Michael Vergnolle of Arvada, Colorado; two granddaughters, Christie (Jacob Bloodworth) and Sallie Mathis of Oakton, Virginia; one great granddaughter, Ella Bloodworth; and several nieces and nephews. Doyle was a graduate of Berry College and earned M.A. and Ph.D. degrees in Political Science from the University of Georgia. He was a postdoctoral fellow, serving as an assistant editor with The Papers of Thomas Jefferson project at Princeton University; a participant in the Institute for Educational management at Harvard University and an Institute for College and University Administrators, American Council on Education. Dr. Mathis was a faculty member at Belmont University, Brenau University, and California Baptist University. During a decade of service at the University of West Georgia, he served as Professor of Political Science, Head of the Political Science Department, Dean of the Graduate School, and Associate Dean of Faculties. Dr. Mathis served at Berry College as Vice President for Academic Affairs/Provost for a quarter of a century, 1975-2000. After retiring from the administrative position, he invited a colleague, Ouida Dickey, to assist him in the writing of two books on the history of Berry: Martha Berry: Sketches of Her Schools and college (Atlanta: Wings Publishers, 2001) and Berry College: A History (Athens: University of Georgia Press, 2005). Other publications include articles in the Journal of American History and the American Journal of Legal History. Honors received include: Who’s Who Among Students in American Universities and Colleges, Phi Sigma Alpha (political science honor society), Phi Alpha Theta (history honor society), Phi Beta Kappa (academic honor society), University of Georgia Alumni Foundation Fellow, National Historical Publications Commission Fellow, Berry College Distinguished Achievement Award. Dr. Mathis served as the first president of the Georgia Political Science Association, and his listings include American Men and Women of Science, Directory of American Scholars, Outstanding Educators of America, and Who’s Who in America for 25 years. Since retiring from full-time employment, Dr. Mathis has taught part-time for more than a decade at the College of Coastal Georgia. He also has served as Chairman of the Board of Directors of Marshland Community Federal Credit Union for several years. Parrott Funeral Home & Crematory in Fairburn, Georgia is in charge of arrangement. A funeral service will be held Sunday, April 28, 2019 at 2 o’clock in the Chapel of Parrott Funeral Home with Dr. William O. (Bill) Priester officiating. In lieu of flowers, contributions may be made to the L. Doyle Mathis Endowed Scholarship at Berry College, Mounty Berry, Georgia 30149.

Doyle Mathis (82), of Brunswick, Georgia, passed away Thursday, April 25, 2019, at his residence, with his loving family by his side after a brief illness. He was born on May 5, 1936, in Forsyth County, Georgia. He was the son of Luster Mathis... View Obituary & Service Information

The family of Doyle Mathis created this Life Tributes page to make it easy to share your memories.

Send flowers to the Mathis family.