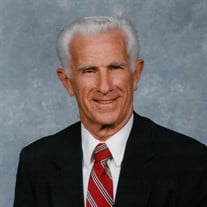 E.F. “Pete” Moore It is with great sadness that the family of E.F. “Pete” Moore, age 91, makes known his passing on April 1, 2022. He is preceded by his son Roy (Rosangela) Moore. He is survived by his loving wife of 72 years, Jo Anne. Daughter Kathy (Victor) Fambro, grandson Matthew (Danielle) Purdie, great grandson, Miles Purdie, step-granddaughter, Brooke (Skip) Long, step grandsons, Clay (Nikki) Fambro, Marcello (Barbara) Silva, step great grandchildren Owen, Holly, Michael, and Mika. Pete lived in Cliftondale for over 50 years and was a Deacon at the First Baptist Church of Cliftondale. He served in the U.S. Air Force then 40 years at Delta Airlines, retiring as G.M. Aircraft Maintenance – Hangar. After retiring, he enjoyed volunteering for many causes, including the 1996 Olympic opening and closing ceremonies and Habitat for Humanity. Funeral services will be held Saturday, April 9, 2022 at 4 o’clock in the Chapel of Parrott Funeral Home with Dr. Darwin Caldwell officiating. Those wishing may sign the online guestbook at www.parrottfuneralhome.com. The family will receive friends from 2:30 until service time at Parrott Funeral Home and Crematory, 770-964-4800.

The family of E.F. "Pete" Moore created this Life Tributes page to make it easy to share your memories.

E.F. “Pete” Moore
It is with great sadness that the family of...