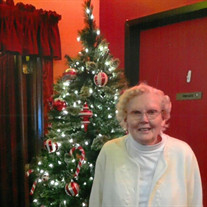 Elizabeth Williams Morris of East Point, Georgia, passed away peacefully in her sleep on the morning of January 2, 2022. She was 96 years old. The daughter of Noah Joseph and Lucinda Williams, Elizabeth was born on August 9, 1925 in Fayetteville, Georgia. She was blessed with nine brothers and sisters. All ten of them shared in helping their parents raise, pick, and sell cotton. In spite of the hard work, Elizabeth and her siblings had wonderful times laughing and playing pranks on each other. Elizabeth went on to work at National Biscuit Company in Atlanta in 1946. There she met a handsome young man named Ira Lloyd Morris, Jr. The two fell in love and were married on November 25, 1948. They went on to have two children, Joe Carl Morris, born in 1955, and Bona Morris Gray, born in 1963. Elizabeth is preceded in death by her father, Noah Joseph Williams, her mother, Lucinda Williams, her brothers Andrew Williams, Frank Williams, Edgar Williams, and Harvey Williams, her sisters Mary Williams Bray (Bill), Martha Williams Williford (Wilber), Mamie Lou Williams Moore (Amos), and Mildred Williams Turner (Robert). She is survived by her son and daughter-in-law, Joe and Kitty Morris of Fernandina Beach, Florida, her daughter and son-in-law Bona and Tom Gray of Fayetteville, Georgia, her grandsons, Trent Morris and Will and John Gray, sister, Shirley Moore and a number of nieces, nephews, cousins, and all their children. Funeral services for Elizabeth will be held at 2:00 p.m. on Thursday, January 6, 2022 at Parrott Funeral Home in Fairburn, Georgia. Visitation will be held two hours prior to the funeral. Elizabeth will be interred with her husband, Ira, at Forest Lawn Memorial Gardens in Fairburn, Georgia.

Elizabeth Williams Morris of East Point, Georgia, passed away peacefully in her sleep on the morning of January 2, 2022. She was 96 years old. The daughter of Noah Joseph and Lucinda Williams, Elizabeth was born on August 9, 1925 in Fayetteville,... View Obituary & Service Information

The family of Elizabeth Morris created this Life Tributes page to make it easy to share your memories.

Send flowers to the Morris family.