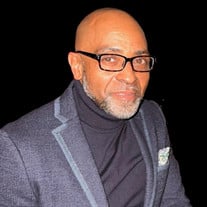 Freddie Gene Williams Jr. The third son born to Freddie Sr. and Lula Williams. He was affectionately known to those close to him as “Geno”. He was quiet, reserved, very passionate and loved his family tremendously. He attended St. Michael’s Elementary School and Waller High School in Chicago, Illinois. Freddie later moved to Atlanta, Georgia where he developed a love for art. He would get a brush, a bottle of wine, turn on some jazz and paint for hours. His artsy style gave him the flair for fashion and his unique style of dress which was undeniable. He had a love for music and sang with his brothers in a group called “Top Shelf” and performed for many occasions. He had an amazing tenor voice that rounded out the harmony with his brothers. He also worked in some of the finest dining establishments in Atlanta where he developed his culinary skills and perfected his ability to cook gourmet meals at the drop of a hat. He was so happy to have met his friend and partner Valerie Hampton, whom he loved and spoke very highly of. He leaves to cherish: His Mother: Lula Williams - Atlanta, GA His Children: Deonta Reed - Dubuque, IA Sade’ Williams - Chicago, IL Kaschief Williams - Chicago, IL His 10 Grandchildren His Brothers: Kenneth (Crystal) Williams - Atlanta, GA Andre Williams (fiancee Pamela Kimbrough) - Atlanta, GA Victor (Desiree) Williams - Atlanta, GA Thaddaus (Nyoma) Williams - Ocala, FL His Aunts: Ruby McElroy, Mable Hawkins, Barbara Hayes, and Patricia Taylor, all from Chicago. Also, a host of nieces, nephews, cousins and friends from Atlanta and Chicago. Those who preceded him in death include his Father, Freddie Williams Sr. and Son, Najee Williams. Funeral services will be held Monday, January 10, 2022 at 2 o'clock in the Chapel of Parrott Funeral Home with Prophetess Brenda Knox officiating. The family will receive friends one hour prior to the service at Parrott Funeral Home and Crematory, 770-964-4800.

Freddie Gene Williams Jr. The third son born to Freddie Sr. and Lula Williams. He was affectionately known to those close to him as &#8220;Geno&#8221;. He was quiet, reserved, very passionate and loved his family tremendously. He attended St.... View Obituary & Service Information

The family of Freddie Williams created this Life Tributes page to make it easy to share your memories.

Send flowers to the Williams family.