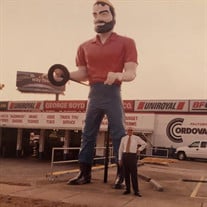 George Rellie Boyd, Jr., of Haralson, GA passed away on Tuesday, December 15, 2020. George went to meet the Lord peacefully, at White Oaks Farm (his favorite place), surrounded by his family, after 90 purpose-, faith-, and love-filled years. Born on February 12, 1930 to George Rellie Boyd, Sr. and Ruth Morris Boyd, George was soon joined by a younger sister, Barbara. Growing up, his parents instilled a strong work ethic and most importantly, a love for Jesus. George and his family attended Oakland City Baptist Church. From an early age, he freely shared both his faith and God-given blessings with others. After attending Boys High School in Atlanta, George later graduated from Brown High School. While at Brown, George was cited for his “exemplary meritorious record” due to his active membership playing the coronet in the Concert Band, membership in the church orchestra, membership in the ROTC, all while being “excellent in scholarship and in attendance”. For undergraduate study, George attended Mercer University and then went on to Emory University School of Law to honor his father’s desire that he become a lawyer. After graduating first in his class, George promptly informed his dad that he was going into the tire business, where George Sr. worked. During the Korean War, he served as a lawyer in the United States Air Force before finally making good on his plan to enter the tire business. After working for Herbert Gordy at Gordy Tire as President, he stepped out on his own in 1967 to establish Boyd Tire Company in East Point, GA as an independent tire dealer. The business flourished, fronted by the well-loved Paul Bunyan statue holding a tire, visible from interstate I-85 near Virginia Avenue. After George retired in 2000, his sons (George III and Hudson) took over the family business. George met the love of his life, Mary Alice Hudson, as a young teenager while vacationing at Clearwater Lake in Sharpsburg, GA. George’s mother and sister conspired with Mary Alice to encourage the romance, somewhat needlessly, because to say George was smitten would be an understatement. He and Mary Alice married in 1951, and were blessed with four children, seventeen grandchildren, and seventeen great grandchildren. Beyond his family and business, George found purpose in his dedication to his church community. He was a longtime member of Cliftondale Baptist Church in College Park, GA and most recently, Haralson Baptist Church in Haralson, GA. George loved spending his free time working on his farm in Haralson. He could often be found on a tractor, picking up every last pinecone that dared to tarnish his perfectly manicured lake view, or chasing away the ever-present geese who never took the hint. White Oaks Farm was the setting of joy-filled family bar-b-ques, long walks with Mary Alice, hunting with close friends, and quiet mornings fishing off the dam. George also loved cars, Mexican food, ice cream, the Kiwanis club, and chasing his grandchildren. Mr. Boyd is preceded in death by parents, George R. Boyd, Sr., Ruth Morris Boyd, sister, Barbara Boyd Ivey, his grandson Wade Drew, as well as his great grandson, Clay Hardin. He is survived by loving wife, Mary Alice Boyd; his four children: George R. Boyd III and his wife Sharon, Mary Jan Webb and her husband Thomas Watson Webb III, Claire Boyd Drew, and Hudson Boyd and his wife Dawn; his seventeen grandchildren: Shannon Hardin, Terry Hardin, Meagan Ruth Dickerson and her husband Kevin, George Rellie Boyd IV and his wife Taylor, Kelli Webb, Kristin Webb, Thomas Watson Webb IV and his wife Hannah, Kimberly Webb, Seth Webb, Lee Webb and his wife Niki, Mary Bess Webb, Jason Drew, Allen Drew and his wife Stephanie, Nathan Boyd, Brooke Boyd, Hayleigh Merk and her husband Chad, Jessica Strickland and her husband Jim; seventeen great grandchildren (plus one on the way); and cousin Helen Heaton. George was always thinking of others – to ensure the safety of his family and friends, the immediate family will hold a small memorial service on Monday, December 21, 2020. A more fulsome celebration of George’s life will be held in summer 2021, when we can gather safely outdoors in George’s favorite place – White Oaks Farm. The family appreciates your condolences and love during this time and looks forward to honoring George with you soon. In lieu of flowers, donations in George’s memory can be made to Georgia Baptist Children’s Home, The Alzheimer’s Association, or Christian City. Parrott Funeral Home and Crematory, Fairburn. 770-964-4800.

The family of George Rellie Boyd, Jr. created this Life Tributes page to make it easy to share your memories.