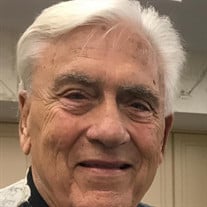 Mr. George Lewis Tedder, Jr., age 82 of Newnan passed away Tuesday, February 22nd, 2022, unexpectedly due to an accident. He was born April 3, 1939 to the late George Lewis Tedder Sr. of Jacksonville, FL and June McLarin Tedder of Fairburn, GA. George was lovingly know as Papa to his children, grandchildren and great-grandchildren. Papa grew up at Jacksonville Beach, Florida where he attended Fletcher High School where he was the Homecoming King and senior superlative “Most Popular.” He met his wife of almost 60 years while he was working as a life guard for Beach Patrol Jax Beach Florida. On weekends, he volunteered with the American Red Cross Volunteer Life Saving Corps Jacksonville Beach Florida. While at Fletcher, he was a standout basketball and football player. As a star tight-end at Fletcher he was awarded a football scholarship to the University of Florida where he graduated with a degree in Mechanical Engineering. He attended OCS in Newport, RI, where he was on the Color Guard. He then served five years as an officer in the US Navy based out of Newport, RI, on the Navy’s USS Yosemite (destroyer tender, AD-19) and the USS O’Hare DD-889 Destroyer in the Atlantic Fleet based out of Norfolk, Va. Then he was stationed at the Patuxent River Naval Air Station, assigned to the D.A.S.H. Program, drone anti submarine helicopter program. While in the Navy, he was recruited by Boeing to work on the development of the 747 airplane in Seattle. After Boeing, he had a successful 40-year career in plastics recycling, machinery sales & development based in the Atlanta area. His territory was all over the world, designing systems to recycle plastic from 1970 til 2005. My Papa enjoyed his family most of all. He especially loved the beach, seafood, Mom’s cooking, fishing, SEC football, UGA athletics, the Atlanta sports teams, and restoring his old center console Boston Whaler. The highlight of the last season was his Bulldogs winning the National Championship Football and his Atlanta Braves winning the World Series. He loved the Lord and dedicated his life to His service. “…But as for me and my house, we will serve the Lord.” Joshua 24:15. He was an active member at Jonesboro Church of Christ. He is survived by his wife, Elizabeth Carter Tedder; children, Jonathan Tedder and his wife, Brenda, Julie Mosby, Jennifer Leach and her husband, David, Jessica Adair and her husband, Shayne; grandchildren, Libby, Elizabeth (Conner), Victoria (Caleb), Jonathan, Reid, Caleb, Julianna, Joseph, Julia, Jonathan; great grandchildren, Carter Rose, Charley Ryann, June Elizabeth, Ada Lea, and one on the way, Evan Claire; sister, Suzanne Newman and her husband, Bob; niece, Bonnie McGowen; nephew, David McDowell; great niece, Natalie Brooks. A memorial service will be held Saturday, March 26, 2022 at 4 o’clock in the Chapel of Parrott Funeral Home with the family receiving friends one hour prior to the service at Parrott Funeral Home. In lieu of flowers send donations in his memory to: Volunteer Life Saving Corps 2 Ocean Front N Jacksonville Beach, FL 32250

The family of George Tedder, Jr. created this Life Tributes page to make it easy to share your memories.