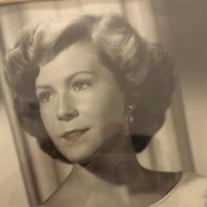 Helen Woody Scarbrough, age 88, of Union City, died Friday, May 8, 2020. She was born February 4, 1932, in East Point, GA., daughter of the late Milton Woody and Lola Ingram Woody. Helen graduated from Russell High School in 1949. Throughout her career, she worked as a bookkeeper and office manager in several different business in metro Atlanta. Helen lived life with laughter and enjoyment and loved to entertain and socialize. She loved meeting new people and spending time with old friends. She lived the last fifteen years of her life at Christian City, a retirement community in Union City. There she made many friends, played cards, and enjoyed events such as breakfasts, concerts, birthday parties, and trips to North Georgia in the fall. Survivors include her son, Stephen Scarbrough of Nokomis, FL; brother, Robert N. Woody of Fayetteville; nieces and nephews, Donna Woody Miller of Brooks, Kem Woody Williams of Fayetteville, Kevin Woody of Fayetteville, Phillip Woody of Sharpsburg, Patti Hamilton of Santa Rosa Beach, FL, and Beverly Sanderlin of McDonough; along with many great nieces and nephews; last but not least, her beloved dog, Sam. A memorial Service will be held at a later date when it is safe. Condolences may be expressed at www.parrottfuneralhome.com

The family of Mrs. Helen Woody Scarbrough created this Life Tributes page to make it easy to share your memories.

Send flowers to the Scarbrough family.