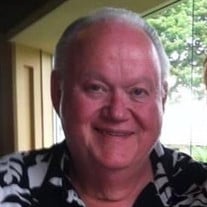 Former Senoia resident, Howard (Howie) G. Brooks died peacefully November 4, 2021 at his home. There will be a celebration of life to remember Howie at Southwest Christian Church in Newnan on Saturday, November 20th from 2:00-4:00. We will be serving food and refreshments. Howard was born in DeKalb, IL on January 25th, 1950 to Paul and Mary Brooks. Howard is survived by his wife of 50 years Gloria and their two children Chris (Michelle) & Cory (Sharon). Papa Howie was grandfather to 17 grandchildren; Lance, Ava, Camden, Layla, Macie, Hadley, Gillian, Denney, Beckett, Anna Lee, Stella, Greta, Evelyn, Greta, Zander, Oliver and Rowan. Howard is also survived by his sisters Pauline and Georgia and several nieces and nephews. He was preceded in death by his brother Ross and sister Doris. Howard was a fun-loving man who spent his life supporting youth sports from the time he and his wife Gloria relocated to Georgia in 1977. Howard touched many lives in the community through his coaching of youth football and wrestling. He was instrumental in the growth of youth wrestling in GA. He started the Peachtree City Wresting Club and founded the Georgia Kids State Wrestling Championship in 1984. He was inducted to the Georgia Kids Wrestling Hall of Fame in 1994. He will long be remembered for his countless time coaching, promoting and following youth wrestling and football. His other interests included Florida State Football, Cooking on his smoker and entertaining friends and family. Howard was a man of many talents and spent his professional career in many different industries including Newspaper, local retail, home building and finishing in IT.

Former Senoia resident, Howard (Howie) G. Brooks died peacefully November 4, 2021 at his home. There will be a celebration of life to remember Howie at Southwest Christian Church in Newnan on Saturday, November 20th from 2:00-4:00. We will... View Obituary & Service Information

The family of Howard (Howie) G. Brooks created this Life Tributes page to make it easy to share your memories.

Send flowers to the Brooks family.