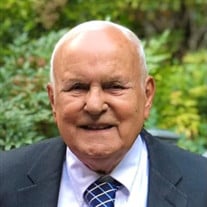 On Thursday November 4th after a brief illness, Jack DerMoushegian passed away at the age of 88. Despite this sad passing, thoughts of him bring a smile to our faces. He was loving, generous, and at times outright goofy. Jack never met a stranger and touched many lives along the way, especially those who could be swayed by a gift of pretzels or The Cross in My Pocket. A proud first generation American born in 1933 to Armenian immigrant parents, Harry and Azniv, he is survived by his two sisters, Rose and Agnes, and his wife of 60 years, Virginia Denny DerMoushegian. Jack was drafted into the US Army April 1st, 1953 where he served as Supply Sergeant. His many stories included increasing the army’s cutlery inventory by locating stolen items in pig slop at a nearby farm. In 1958 at Belhaven College he met his wife, Virginia, who recognized his special character and, of course, as a special bonus he had a car. Jack’s entrepreneurial instincts were fostered at a young age in his dad’s barber shop. His career history includes many unexpected pursuits: art school, airplane mechanic, book shop manager, gas station owner, luxury hotel valet in Miami, eventually leading to his “Cross In My Pocket” and packaging businesses. From Mississippi Jack and Virginia moved for a brief time to Richmond, eventually settling in Atlanta in 1970. For Jack nothing meant more than spending time with family creating new memories, playing games, traveling and, as good Armenians, eating together. Their family of four children, Virginia, Jackie, Kathy and Griff grew exponentially with the addition of 4 spouses, 11 grandchildren, 2 granddaughter-in-laws, and two great-grandchildren. The family enjoyed a parade of pets. One, Brinkley, recognized what an amazing human he had and would sit for up to eight hours at the entrance to the driveway awaiting Jack’s return. Christmas, especially, his Village was a primary love and obsession of Jack’s. He spent countless hours arranging thousands of collected ceramics, along with handmade items, to create his own Christmas wonderland, which filled the entire floor of their carriage house. Nothing made him happier than sharing it with others. Jack enjoyed collecting in all its many forms: stamps, coins, trains, and anything Christmas related. Faith and family were foremost priorities throughout his life, which he exemplified through his actions. He was loved dearly and will be missed by many. Memorial Services will be held Tuesday, November 9, 2021 at 11 o'clock at Dogwood Church, 975 GA 74, Tyrone, Georgia 30290 with Pastor Keith Moore and Pastor Bruce Hebel officiating. Those wishing may sign the online guest registry at www.parrottfuneralhome.com. The family will receive friends one hour prior to the service on Tuesday at Dogwood Church. In lieu of flowers please make donations in Jack’s memory to Gideon’s International or Dogwood Church, Tyrone, Georgia.

On Thursday November 4th after a brief illness, Jack DerMoushegian passed away at the age of 88. Despite this sad passing, thoughts of him bring a smile to our faces. He was loving, generous, and at times outright goofy. Jack never met a... View Obituary & Service Information

The family of Jack DerMoushegian created this Life Tributes page to make it easy to share your memories.

On Thursday November 4th after a brief illness, Jack DerMoushegian...

Send flowers to the DerMoushegian family.