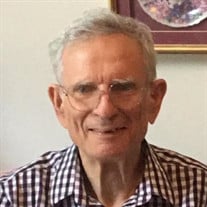 Mr. James Lynn Moore, 78, of Peachtree City, Georgia, passed away on Sunday, February 20, 2022. He was born March 31, 1943, in Union City, Tennessee, son of the late Paul Ardra Moore and Martha Jeanne Peeler Moore. Jim spent most of his childhood in Nashville, Tennessee where he was an active youth at Woodmont Baptist Church. He was active in scouting and earned the rank of Eagle Scout. He graduated from Hillsboro High School, Vanderbilt University with a BS in Chemistry, and University of Tennessee with an MS in Geology. Jim served as an Artillery Survey Specialist in the Army during the Vietnam conflict and received a bronze star. Jim married Ruth Pool Moore on April 28, 1973. They raised their two children, Gary and Jennifer, in Nashville where Jim worked as a geologist for the State of Tennessee. Jim was passionate about astronomy. He enjoyed taking out his telescope as nearby as the Natchez Trace and as far away as Oklahoma. Jim is survived by his wife, Ruth; son and daughter-in-law, Gary and Jenn Moore, and their children Allison and Ian; daughter and son-in-law, Jennifer and Daniel Hedlund, and their children Erick, Madeline, and Alexander. The family will receive friends at Parrott Funeral Home this Sunday from 2-5 pm. A brief chapel service will be held on Monday, March 7 at 1 pm at the Middle Tennessee State Veterans Cemetery in Nashville. In lieu of flowers, donations can made to the Michael J. Fox Foundation or American Parkinson’s Disease Association.

The family of James Lynn Moore created this Life Tributes page to make it easy to share your memories.