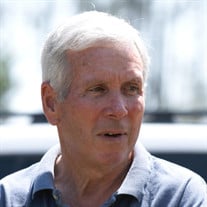 James “Elbert” Potts, 85, of Greenville, passed away Sunday, October 18th at home surrounded by his family. Graveside services will be held Thursday, October 22nd at 1:00 pm at Holly Hill Memorial Park. Elbert was born February 22, 1935 in Union City, GA to the late Elbert Herman Potts and Lennie Pearl Parrott Potts. He is also preceded in death by his son, Elbert Herman Potts and siblings, Donald Lamar Potts, Sr. and Alice Corine Potts Rainwater. He is survived by his wife, Joann Murray Potts, Brother Walter Leon Potts (Diane), Sister Pauline (Cricket) Teate, Sons, Jim Potts (Dallas), Barry Potts (Benita),), Daughters, Vicky Henderson (Steve), Jill Price (Chris) and former daughter-in-law, Naomi Murphy. He was blessed with Grandchildren, Jody, Crystal, Melissa, Joshua, Amanda, Ashley, Gabrielle, Noah, Morgan, Madeline, Lauren and many nieces, nephews, great grandchildren and great, great grandchildren . Elbert was a veteran of the U.S. Army, serving in Germany during the Korean Conflict as an “All Wheel Mechanic”. He was proud of his services that ranged all the way from working on a bicycle up to a tank. He retired from Gulf Oil after 36 years and worked with his brother, Walter, at George H Green Oil, Inc for several years after retirement. He had a strong Christian faith and was a member of Harmony Grove Baptist for most of his life. He was a faithful “All Wheel Servant”, ranging from his handyman duties, driving the church bus and in desperate times, leading music. He strived to be the best Christian, Husband, Father, Brother, Uncle and Friend he could be. He lived his life by helping the sick and those in need. Elbert had a great love and commitment to his family. He was completely devoted to his wife, his children and maintained a strong bond with his brothers, Walter and Don. Throughout his long battle with Alzheimer’s, he kept close to his devoted wife of 64 years, Joann. She never left his side and even when he could not recall anyone else, he always remembered Joann. The family is accepting flowers or asks you to follow Elbert’s legacy in spending time with family, helping those sick or in need. Special thank you to his many caregivers, family and friends that provided comfort, prayers, meals and love during this difficult time.

The family of James Elbert Potts created this Life Tributes page to make it easy to share your memories.

Send flowers to the Potts family.