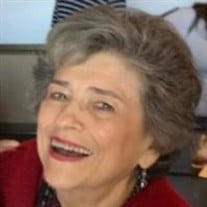 Janice was born in December of 1939 in Dothan, Alabama. She married her high school sweetheart, Terry Killingsworth in 1958. Her faith in Jesus was an important part of her life. As a wife, she proudly stood by Terry’s side and supported him and his call to ministry. This calling led them to homes and friendships throughout Texas, Alabama, & Georgia. She was a strong woman. A woman of class. A woman with a heart that would always put others above herself. A mother of three boys who loved her family well. You would find her at church on Sundays & Wednesdays singing in the choir and investing in the many friendships made. She had several jobs outside the home as well, but her family was always a priority. Janice was in her element when serving behind the scenes by supporting her husband, loving her family, and connecting with her church family. With her servant's heart, inviting smile and kind heart, she had a ministry of her own to those she met. As her boys grew, she supported them in all of their ventures. Cheering them on, whether high school sports or chorus events, and then as they moved into careers, and eventually to have families of their own. Janice had a tremendous impact on those she left...probably more than she realized. She is survived by sons: Tim Killingsworth and his wife, Lynne of Kennesaw, GA; Joe Killingsworth and his wife, Heather of Milton, GA; Todd Killingsworth and his wife, Amy of Newnan,GA; Grandchildren: Joy Killingsworth Warren (Larry), Amy Claire Killingsworth, Parker Killingsworth, Ben Killingsworth, Sam Killingsworth, Jake Silvia and Shay Silvia; Great Grandchildren: Jackson Warren, Maddox Warren and Evelyn Warren. And her sister, Jerry Bailey in North Carolina.

Janice was born in December of 1939 in Dothan, Alabama. She married her high school sweetheart, Terry Killingsworth in 1958. Her faith in Jesus was an important part of her life. As a wife, she proudly stood by Terry&#8217;s side and supported... View Obituary & Service Information

The family of Janice Killingsworth created this Life Tributes page to make it easy to share your memories.

Janice was born in December of 1939 in Dothan, Alabama. She married...

Send flowers to the Killingsworth family.