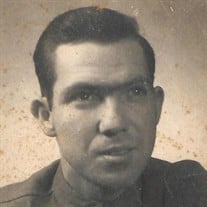 Jesse Eugene Slaton died Wednesday, May 27, just two weeks shy of his 97th birthday. He was born in Tyrone, GA, on June 13, 1923 to Walter Slaton and Jessie Handley and was the youngest of eight children. As a child, he was given the nickname of "Doody" by his siblings and was still called that by family and long-time friends. Doody was a resident of Southland Health and Rehabilitation where he was known for his love of bingo and for always having peppermint candies. He loved to sit on his "front porch," which was actually the door to his room, and speak to passers-by. He was very hard of hearing, but that did not stop him from talking. He spent the last month of his life zipping around Southland on his big red power chair, compliments of VFW Post 9949 of Peachtree City. He was a proud and patriotic World War II veteran, and wore his World War II cap everywhere he went. It earned him many free meals at Cracker Barrel as nearby diners would want to thank him for his service by buying his dinner. Up until Doody entered skilled nursing last fall, he kept a garden, although the size of the garden got smaller as he got older. Even in his 90's, he was known for his huge tomato plants that produced some of the tastiest tomatoes around. His gardening repertoire also included turnip greens and Peter Peppers. Another of his favorite pastimes was getting out on his riding lawn mower around the yard, sometimes cutting grass, sometimes just enjoying the ride. He was a long-time employee of Cluett and Peabody, makers of Arrow Shirts, until a heart condition forced his early retirement. He was also a 73-year member of Tyrone Lodge #644. Doody was preceded in death by his beloved wife Charlotte, his parents, and his siblings (Annie Pearl, Marion, Oscar, Ted, Lucy, Howard, and Velma). He is survived by daughter Debbie Slaton Bell, son Tim Slaton (Macheri), and numerous nieces, nephews, and cousins. Due to COVID, funeral services with limited military honors will be held at Sharon Memorial Gardens in Tyrone, GA on Saturday, May 30, at 11:00. Social distancing rules will be practiced. Rev. Jim Ellison will officiate. The Slaton family would like to extend our gratitude to the staff at Southland Health and Rehab for their attendance and loving care. Our thanks, too, to VFW Post 9949 for jazzing up Doody's wheels with the power chair he enjoyed so much. In lieu of flowers, contributions may be made in Doody's name to VFW Post 9949, PO Box 2267, Peachtree City, GA 30269 or to the charity of your choice.

Jesse Eugene Slaton died Wednesday, May 27, just two weeks shy of his 97th birthday. He was born in Tyrone, GA, on June 13, 1923 to Walter Slaton and Jessie Handley and was the youngest of eight children. As a child, he was given the nickname... View Obituary & Service Information

The family of Jesse E Slaton created this Life Tributes page to make it easy to share your memories.

Send flowers to the Slaton family.