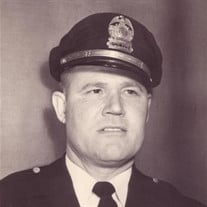 Jesse Watson, 96, of Union City, Georgia passed away peacefully on December 13, 2021. Parrott Funeral Home in Fairburn, GA will conduct a memorial service on Tuesday, December 21 at 11:00 am, with visitation beginning at 10:00 am. Dr. Paul Mims of Friendship Baptist Church in Palmetto will officiate. Final resting place will be Forest Lawn Memorial Gardens in College Park, Georgia. Any floral memorials should be sent to Parrott Funeral Home, 8355 Senoia Road, Fairburn, GA 30213. Donations to Southwest Christian Care in Union City (swchristiancare.org) are welcome in lieu of flowers. Jesse Junior Watson was born in Ozark, Alabama on August 30, 1925 to Taylor and Lille Mae (Hutto) Watson. He left Alabama in 1948 and moved to Atlanta. He met Sarah Burson, his true love and wife for 71 years, on a blind double date one week after arriving in Georgia. They were accompanied by Zach and Emily Mathews on a visit to the Cyclorama outside the Atlanta Zoo. They were married on October 7, 1949. Growing up in Alabama, Jesse worked summers on the family farm and winters in a nearby sawmill. He loved to tell stories about his life behind a plow, providing food for his family by hunting with a slingshot and working in that sawmill. After arriving in Atlanta, he worked as a forklift driver, a house painter, a security guard at the Federal Reserve, and for Southern Railway. He also ran his own landscaping and ceramic tile businesses. In 1956, he joined the East Point Police Department, where he spent over 27 years, retiring as a Lieutenant in 1983. Jesse was the local firearms instructor for several local police departments and for the GBI. He was the city-appointed caretaker for Sweetwater Creek State Park from 1973 to 1978. Jesse was a true outdoorsman. He lived his 96 years to the absolute fullest. He enjoyed hunting, fishing, farming, taxidermy (his work is prominently displayed at the Cochran Mill Nature Center) and watching “his team,” the Atlanta Braves, on television. Jesse could take down a deer, a turkey or any kind of game with a single shot. When he told hunting stories (or any story – he had a million of them), he would act out each part of what happened. He became both the hunter and the prey, the policeman and the perpetrator, all with big gestures and appropriate expressions. Dinnertime was story time and if you were at his table, you likely couldn’t catch a breath for laughing. Jesse was proud of growing the tallest and best tomatoes anywhere in town. He was known as the “tomato man” because he would hang bags of tomatoes on the front door of neighbors and friends. He loved growing vegetables and working the field on his farm on Cochran Mill Road. This was a very special family place – Jesse built two houses, several outbuildings and even a playhouse for his grandchildren there. It was “home” to friends and family for over 30 years. Jesse served as a deacon at Friendship Baptist Church for over 40 years. He was also a member of the Grand Lodge of Georgia Free Masons. He is preceded in death by his beloved wife, Sarah, his parents; brothers Floyd, Buford (Boots), and Cecil; sisters, Kathleen, Anne and Louise; and son William Robert (Bob). Jesse is survived by his son, Joseph (Mary) Watson of Muscadine, Alabama; daughter, Kathy Watson (Chris Callahan) of Decatur, Georgia; daughter-in-law, Paula Watson of McDonough, Georgia; grandchildren, Adam Watson, Amanda Falls, Stephanie Urrea, John Watson, Paul Watson and Mary Beth Watson; great-grandchildren, June Falls, Hank Falls, Diego Urrea, Sophia Urrea and Cairo Watson.

Jesse Watson, 96, of Union City, Georgia passed away peacefully on December 13, 2021. Parrott Funeral Home in Fairburn, GA will conduct a memorial service on Tuesday, December 21 at 11:00 am, with visitation beginning at 10:00 am. Dr. Paul... View Obituary & Service Information

The family of Jesse Watson created this Life Tributes page to make it easy to share your memories.

Send flowers to the Watson family.