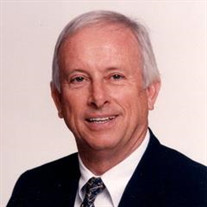 Joseph Crawford Culp, Sr. died March 4th, 2022. Born in Lancaster, SC, he was the son of Woodrow Carter Culp and Maggie Blackmon Culp. Mr. Culp was a 1955 graduate of Lancaster High School and earned his BS in mechanical engineering, class of 1959, at Clemson A&M College. Due to his four year participation in ROTC, he was awarded a second lieutenant commission in the US Army artillery. After active duty, he served with the North Carolina National Guard and the Army reserve. In 1972, he received an honorable discharge while holding the rank of Captain. Mr. Culp began his engineering career, in Charlotte, NC, later moving to Lancaster where he joined his father at Culp Heating & Air Condition, Inc. After his father’s retirement, he managed the company until selling it in 2002. Mr. Culp moved to the Isle of Palms, SC, and came out of retirement to work part-time for The Staley Company for six years. After enjoying living in Wild Dunes for close to twenty years, he and his wife moved to Peachtree City, GA to be closer to their daughter. Mr. Culp was a long-time member of the First United Methodist Church of Lancaster and served five years as chairman of the Board of Trustees. After moving to the Isle of Palms, he joined IOP First United Methodist Church and served as president, secretary and treasurer of The Men’s Club. Mr. Culp was an Eagle Scout and served as a BSA adult volunteer in Lancaster. He served as director of the Lancaster Jaycees and was a member of the Lancaster County Economic Development Corp. and the South Carolina Association of Heating & Air Conditioning Contractors. He also belonged to the Lancaster Rotary Club, Lancaster Chamber of Commerce, American Society of Heating, Refrigeration and Air Conditioning Engineers, Clemson Alumni Association, SC Mechanical Contractors Association, Wateree Sailing Club, Lancaster Shag Club and the Wild Dunes Tennis Club. Mr. Culp is survived by his wife, Virginia (Ginger) Bennett Culp, formally of Kershaw, SC. Together, they enjoyed 61 years as best friends, dance partners and travel companions. He is also survived by their daughter, Shelley R. Culp (Dr. Michael E. Obenshain), of Fayetteville, GA, his sister, Linda C. Brown (Dr. David E. Brown), of Sumter, SC, and sister-in-law Joan B. Clyburn of Kershaw, SC. He was preceded in death by his son, Joseph (Joey) C. Culp, Jr. Parrott Funeral Home of Fairburn, GA is handling cremation and funeral services will be at Isle of Palms First United Methodist Church on April 1st at 11:00am. Family and friends are invited afterwards to Wild Dunes Property Owners’ Beach House. In lieu of flowers, please consider a donation to IOP First United Methodist Church or First United Methodist Church of Lancaster.

The family of Joseph Culp created this Life Tributes page to make it easy to share your memories.

Send flowers to the Culp family.