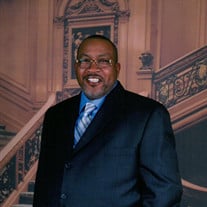 Reverend Julius C. Herron, Jr. of Newnan, GA passed away on March 15, 2020. Julius was the son of the late Julius C. Herron, Sr. and the late Ada Cox Herron. He was preceded in death by his brother, Mark Anthony Herron. He is survived by his wife, Kim Carter Herron; children, Austin North of Miami, FL, Hayden North of Brooks, GA, Emily North of Sioux Falls, SD, Demetrius Whitfield of LaGrange, GA, and Ansley Lathem of Grantville, GA; sister, Carolynn Herron of Las Vegas, NV; brother, Larry Jackson (Susan) of Newnan, GA; grandson, Demetrius Cashton Whitfield; and nieces Ashley Tucker (Huntsville, AL) and Savasia Bethel (Las Vegas, NV). After graduating from Baker High School in Columbus, GA in 1973, Julius immediately carried on his family legacy by joining the United States Marine Corps, serving in Camp Lejeune, North Carolina, Paris Island, South Carolina, Yuma, AZ, and Okinawa, Japan. Julius worked for Newnan Utilities for 23 years, retiring in April 2015 after having made friends with everyone in Newnan. Never one to stay put, Julius started J&L Back-Flow with his best friend and brother, Larry Jackson. Reverend Herron was Ordained on January 19, 1997, and has preached at churches throughout Newnan and the surrounding areas. He was most honored to have served as an Associate Minister under Pastor J.T. Coleman at Summerhill Baptist Church before becoming a pastor himself at Central Baptist Church in LaGrange. From there, God guided his ministry to his most recent service location - New Hope Missionary Baptist Church in Newnan where he assisted the newly installed pastor, Ashley Stewartson. He was involved in Sunday School, Bible Study and various Pulpit Ministries. One of the proudest moments in his ministry was the recent baptism of his son, Austin North, and dear friend, Kelly Keylon, into the fold as believers in Jesus Christ. Those wishing to do so may sign the online guest registry at www.parrottfuneralhome.com. In lieu of flowers, please make donations to New Hope Missionary Baptist Church (4036 Corinth Road, Newnan, GA 30263). ** Due to health concerns and current CDC recommendations, a Celebration of Life service will be held at a later date. Details will be provided as more information becomes available. **

The family of Julius Herron created this Life Tributes page to make it easy to share your memories.

Send flowers to the Herron family.