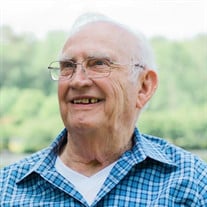 Kenneth M. Carpenter, 93, of Fairburn, GA, went to be with the Lord Sunday, October 10, 2021. Ken was born July 15, 1928, to Theodore Roosevelt and Norma Higgins Carpenter in Madison County, Indiana. His family moved shortly thereafter to North Wilkesboro, North Carolina, where he met his future wife, Pauline Brown. After he served in the US Army during World War II, they were engaged and married on October 20, 1951. Together they made a life in the West End of Atlanta and later in Fairburn, GA, raising a daughter and serving their community, often through their church. Ken was employed as a Fuller Brush salesman, then with Mohawk Brush Company, and ultimately with the United States Postal Service. He spent his retirement years caring for his wife before her passing, doting on his daughter and granddaughter, and enjoying time with friends. He is survived by his daughter, Kennette Hall, of Fairburn; granddaughter, Danielle Hall, also of Fairburn; and many special nieces and nephews. Visitation will be held Wednesday, October 13, 2021, 1 p.m., at Parrott Funeral Home in Fairburn, GA, and funeral services will begin at 2 p.m. in the Parrott Funeral Home Chapel with Dr. Daryel O’Barr and Pastor Charles Huckaby officiating. Interment to follow at Holly Hill Memorial Park in Fairburn, GA. In lieu of flowers, those desiring may make donations to Ramah First Baptist Church, 502 Ramah Drive, Palmetto, GA 30268.

The family of Kenneth Carpenter created this Life Tributes page to make it easy to share your memories.

Send flowers to the Carpenter family.