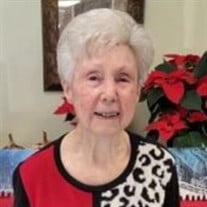 Jean was born on post at Fort Macpherson, near East Point, GA. She was the last born of a rather large family of 9 children. One of her favorite past times in those days was swimming at the Ft Mac pool to the point that her blond hair actually turned green from the chlorine in the pool. Those days in the pool prepared her for great things later on. Jean lived in post housing with her family until her father retired from the army. After his retirement they moved off post into the Perkerson Part area of Southwest Atlanta. At that time a certain boy named Grover was living a couple of streets away and by chance they met in Perkerson Park while playing on what she called a “merry go round”. It was a round spindle mounted table about 6 feet in diameter with bars to push it so everyone would spin around wildly. As time went by they began to date and fell in love and married in 1945. Jean used to say that she had met Grover on a merry go round and had been going around with him ever since! Jean worked for awhile as a switch board operator and in retail until their first child was born. Then she began the 24/7 job of raising the first of 4 children. Jean was always active in church with my father and in volunteer work. In due time, they became empty nesters and in 1987 moved to the Christian City area of Union City, GA. They joined First Baptist Church of Fairburn where they worshipped, studied and served for many years and where she remained a serving member until she was no longer able. Mom became involved in many other volunteer capacities outside of church life. She also joined a group of line dancers called the Christian City Steelers. Their many line dancing exhibitions and shows along with their spectacular costumes provided entertainment for many in senior living facilities, churches and other venues. She was able to do this for 25 years. She thoroughly enjoyed being with such a wonderful group of women. During this time she was also a member of the Mystery Quartet entertainers as they dressed in men’s suits and hats and donned mustaches to pantomime some of the old male gospel and country singers of earlier years. I mentioned Jean was a swimmer. In her 70s she began competitively swimming. She became serious about it and began entering Senior Olympic swimming events. Jean medaled in the Front Crawl Freestyle. Her hair didn’t turn green this time! But as if she wasn’t busy enough already she decided to study for the GED to finish what she started so many decades before in high school. Having completed her course work in 2005 at age 77, she was awarded the State GED Golden Eagle Student of the Year Award. Her award was presented at the Peachtree Ballroom in Atlanta and included a banquet and reception. It was quite an affair. Jean touched so many lives and was a blessing to so many. She is at peace now, free from suffering and in the presence of her loving God and Savior and all the heavenly hosts. A memorial and celebrations of Jean’s life among us will be held on June 19, 2021 2:00PM at the Welcome Center Chapel at Christian City, 7345 Red Oak Road, Union City,GA 30291 | 770-964-3301

Jean was born on post at Fort Macpherson, near East Point, GA. She was the last born of a rather large family of 9 children. One of her favorite past times in those days was swimming at the Ft Mac pool to the point that her blond hair... View Obituary & Service Information

The family of Laura "Jean" Aycock created this Life Tributes page to make it easy to share your memories.

Jean was born on post at Fort Macpherson, near East Point, GA....

Send flowers to the Aycock family.