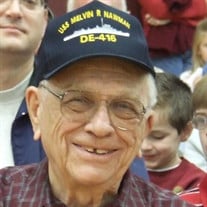 Mr. Leonard “Len” Miller Reid, age 95, of College Park passed away peacefully of natural causes on Wednesday, October, 7, 2020 at Watercrest Senior Living in Newnan, Georgia. Born on May 29, 1925, in Detroit Michigan, Len and his family moved to Buffalo, New York, in 1931. As a member of the Greatest Generation, Len grew up during the Great Depression and served in the U.S. Navy as part of the Pacific Fleet during World War II, including battles at Iwo Jima and Okinawa. He served in the Navy again during the Korean War and returned home to complete his Bachelors Degree at the University of Buffalo. Len enjoyed a long career that included work on equipment for the Apollo missions that sent Americans to the moon, the early pioneering of diagnostic equipment aboard ambulances, and decades of service in medical electronics, including pacemaker and defibrillator advancements. Len and his family lived in northeast Ohio for several years before moving to Georgia in 1976. He served God throughout his life at Delaware Baptist in NY, Wickliffe Presbyterian in Ohio, and most recently as a member of First Christian Church of Tyrone (previously College Park), where he served faithfully for 44 years. He also logged thousands of volunteer hours for countless organizations, including the Boy Scouts, M.D. Collins High School (as a longtime band parent), and Christian City. He will always be remembered for his deep love for family and friends, his quick wit, and his spirit of faithful service to others that he modeled throughout his life. Mr. Reid was preceded in death by his wife, Marjorie Jean Ostrander Reid; sister, Janice Elaine Reid Laderer; parents, Ernest Linwood and Elaine Agnes Reid. He is survived by his children, Alan Douglas Reid and his wife, Carole Stanton Reid, Rebecca “Becky” Reid Clark and her husband, Stephen Ray Clark, Mark Steven Reid, Suzanne Michele Reid Dowell and her husband, Patrick Kiernan Dowell; dear friend Ruth Williams; grandchildren, Paula Stanton Reid (Jason), Katherine Elizabeth Reid Burke (Patrick), Aubrey Meredith Clark Johnstone (Ryan), Daniel Leonard Reid, Lauren McGrath Reid, Jeffrey Reid Clark, Baxter Kiernan Dowell, Kelsey Elaine Dowell, and great-granddaughter Margaret “Greta” Burke. Len’s family wishes to extend their sincere thanks to Watercrest, Home Helpers, and Homestead Hospice of Newnan for the loving care they provided. In lieu of flowers, donations can be made in memory of Leonard Reid to First Christian Church of Tyrone (www.fcctyrone.com) or Homestead Hospice of Newnan (www.homesteadhospice.net). A private graveside interment will be followed by a Celebration of Life Memorial service on Thursday, October 22, at Parrott Funeral Home in Fairburn, Georgia. The family will receive friends Thursday, October 22, 2020 from 1 o’clock until the service begins at 2 o’clock in the Chapel of Parrott Funeral Home with Minister Billy Rowe officiating. Those wishing may sign the online guestbook at www.parrottfuneralhome.com.

The family of Leonard Miller Reid created this Life Tributes page to make it easy to share your memories.

Send flowers to the Reid family.