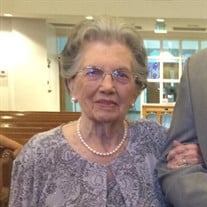 Mrs. Lillian Harbin, age 98, passed away April 17, 2022. She was born in Union City, GA to the late John and Rosalie Patton. She was preceded in death by her husband, Henry Richard Harbin. She is survived by her children, Terry Moore (Andy),... View Obituary & Service Information

The family of Mrs. Lillian Harbin created this Life Tributes page to make it easy to share your memories.

Send flowers to the Harbin family.