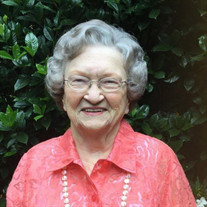 Mary Evelyn &#8220;Sister&#8221; Devereaux, 99, of Holt, Florida, passed away on Thursday, April 14, 2022 after a stroke. She is survived by her son, Morris Devereaux of Holt, Florida, her grandson Michael Devereaux and her great grand-daughter... View Obituary & Service Information

The family of Mary Evelyn "Sister" Devereaux created this Life Tributes page to make it easy to share your memories.

Send flowers to the Devereaux family.