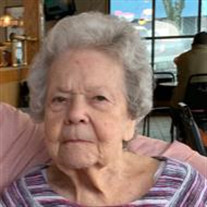 Mrs. Mary Gay Amoss Tucker of Fairburn went to be with the Lord on August 18, 2021. Mary Gay attended Campbell of Fairburn, and received a degree in education from Bessie Tift College in Forsyth. She returned to Fairburn to teach second grade at MP Word Elementary for many years. When her family grew, she chose to stay at home with her children. Her love for teaching children extended to First Baptist of Fairburn where she was very instrumental in leading the “Sunbeam Band” which was the Womens Missionary Union’s program for children. Mary Gay served as the president for the WMU for many years. Missions were her passion, both foreign and home missions, honoring her obedience to our Lord’s Great Commission. Mary Gay and Ed served the church and community of Fairburn, that they so dearly loved, for the better part of 62 years. After Ed went home to be with the Lord in 2015, Mary Gay moved to Auburn, AL with her faithful Yorkie Terrier Buddy, to be near her beloved daughter. She lived out her final years with newly discovered friends, under Beth’s wonderful care and supervision until Her Lord called her home. Mrs. Tucker was preceded in death by her husband of 62 years, Dr Ed Tucker and is survived by her daughter Beth Sprayberry and her husband, Scott of Auburn, AL; sons, John Tucker and his wife, Loretta of Williamson, GA; and Dan Tucker and his wife, Ashli of Fairburn; grandchildren, Mary Grace Sprayberry, Tucker Sprayberry, Ellie Sprayberry, Hutch Sprayberry, Michelle (Tommy) Allen; Cody (Sydney) Tucker, Austin (Ginny) Tucker, Mary Kate Tucker and great grandson, Tucker Allen. Funeral services will be held Saturday, August 21, 2021 at 2 o’clock at the First Baptist Church of Fairburn with Dr. Frank Nuckolls officiating. Interment to follow at Holly Hill Memorial Park. Those wishing may sign the online guest registry at www.parrottfuneralhome.com. In lieu of flowers those desiring may make donations to Lottie Moon Christmas Offering c/o First Baptist Church of Fairburn, 23 Malone Street, Fairburn, GA 30213. The family will receive friends from 12:00 to 2:00 on Saturday prior to the service at the church.

Mrs. Mary Gay Amoss Tucker of Fairburn went to be with the Lord on August 18, 2021. Mary Gay attended Campbell of Fairburn, and received a degree in education from Bessie Tift College in Forsyth. She returned to Fairburn to teach second grade... View Obituary & Service Information

The family of Mary Gay Amoss Tucker created this Life Tributes page to make it easy to share your memories.

Mrs. Mary Gay Amoss Tucker of Fairburn went to be with the Lord...

Send flowers to the Tucker family.