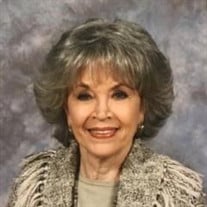 After suffering with Alzheimer’s Disease for several years, Myrna E. Erwin Barron of Newnan, Georgia, passed away on April 14, 2022, at the age of 86. A native Atlantan, she was born on November 17, 1935, to the late Louis E. Ethridge and Lemma Hardy Ethridge. She is preceded in death by her brother Wyndald Ethridge and her husband, LTC Robert “Bob” W. Erwin. She graduated from Brown High School and has kept close ties with many of her classmates. She worked as a clerk typist at Ft. McPherson, Georgia, and later as a secretary at Delta Airlines in the Flight Training Facility, a job she truly loved. She enjoyed shopping, musical theater, shopping, cooking, shopping, traveling and shopping. Her late husband jokingly requested his ashes be buried at the mall so he could be sure that she would visit him. Survivors include her husband, George Barron of Newnan; daughter, Dodi Ramsey (Bobby) of Brooks, Georgia; son, Wayne Pierce (Cynda) of Newnan; grandchildren, Russ Ramsey (Tracy) of Athens, Georgia; Wes Ramsey (Rachael) of Cumming, Georgia; Jessi Klindinst (Matt) of Fairview, Tennessee and Stephen Pierce (Liz) of New Albany, Indiana; great-grandchildren, Cali Ramsey, Wyatt Ramsey, Dalton Ramsey, Isaac Ramsey, Colin Ramsey, Taylor Ramsey, James Pierce and Evie Pierce; her sister, Weida Hobgood (Harold); nieces, Debbie Hobgood, Janet Jeffares (Mark) and Lisa Hobgood; cousin, June Dease Chambers, step children, Starr Barron-White and Van Barron; and her BFF Sandy Griffard of Columbus, Georgia. A Memorial Service will be held at Brooks Christian Church in Brooks, Georgia, Thursday, April 28, 2022 at 11am with her grandson, the Reverend Stephen Pierce, officiating. Visitation will be held at the church, starting at 10am. In lieu of flowers, the family requests that donations be made to Alzheimer’s research through KeepMemoryAlive.org (Lou Ruvo Center for Brain Health at Cleveland Clinic Nevada).

After suffering with Alzheimer&#8217;s Disease for several years, Myrna E. Erwin Barron of Newnan, Georgia, passed away on April 14, 2022, at the age of 86. A native Atlantan, she was born on November 17, 1935, to the late Louis E. Ethridge... View Obituary & Service Information

The family of Myrna Erwin Barron created this Life Tributes page to make it easy to share your memories.

After suffering with Alzheimer’s Disease for several years, Myrna...

Send flowers to the Barron family.