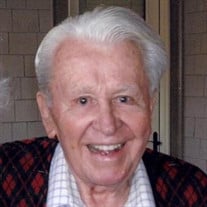 Mr. Philip John Ness, age 95, of Peachtree City, Georgia, passed away Tuesday May 7, 2020. Phil was born in Orlando, Florida in 1925 and attended schools in Winter Park, Florida. In 5th grade, he met a cute girl named Joyce not knowing that one day she would become his wife of 71 years! Phil graduated from Winter Park High School in 1942 and briefly enrolled at The Citadel before joining the US Army Air Corp Cadet program. He then trained as a flight engineer with an air/sea rescue group before serving in Japan in 1945 as part of the Japan Occupational Forces. Upon his return to the USA, Phil enrolled at Indiana University where that cute girl named Joyce happened to be attending. Phil became President of his Fraternity Sigma Phi Epsilon and courted Joyce throughout his time in college. While completing his degree in Business Administration, he married Joyce in 1948 and they started their family. Phil became a Real Estate Developer and successfully developed properties in Florida, but his favorite project was developed on 76 acres he purchased in the North Georgia mountains. Phil named the property “SPRING LAKE” and it became a place of fun and adventure for the Ness family, as well as other Floridians, escaping the heat during summer vacations. In 1963, Phil’s adventurous spirit led him to move his family to Australia where they created many memorable family experiences while he worked for Ansett A&A Airlines as an International Sales Rep. After much thought, Phil moved his family back to Orlando in 1968 to reunite with friends and extended family. Phil’s final career path led him into Education. He taught many practical skills to high schoolers in his Business and Distributive Education classes while also coaching the swim team. We remember Phil as a devoted husband, father, grandfather, and great grandfather. He gave his family guidance along with amazing life experiences and he taught them to value each and every day! Phil will be greatly missed, but his legacy of leadership, love for family, and his adventurous spirit will carry on for generations to come. Phil is preceded in death by his parents Percy and Helen Ness, wife Joyce Ness who passed in March 2020, a son James Ness, and brother Robert Ness. He is survived by his son John Ness (Martha) of Orlando, Florida, daughters Nancy Jackson (Don) of Peachtree City, Georgia, and Susan Larson (Larry) of Sunset SC; grandchildren Keith Jackson (Amy), Kelly Daniels (Jon), Ken Jackson (Becky), Jennifer Larson, Brintney Levine (Alex), Christopher Larson, Alan Ness; great-granddaughters, Caroline Jackson, Hallie Jackson, and Brynn Levine. A memorial service will be held at a later date. In lieu of flowers, please make a donation to your favorite charity. Those wishing may sign the online guestbook at www.parrottfuneralhome.com Parrott Funeral Home and Crematory, 770-964-4800.

The family of Philip John Ness created this Life Tributes page to make it easy to share your memories.

Send flowers to the Ness family.