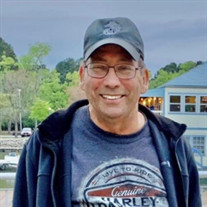 Gunnery Sergeant Robert &#8220;Dale&#8221; Porter, 65, of Griffin, GA passed away peacefully on Tuesday, May 10, 2022. Dale was a decorated veteran who served in the United States Marine Corps for 13 years. He loved serving his country, and... View Obituary & Service Information

The family of Robert Dale Porter created this Life Tributes page to make it easy to share your memories.

Send flowers to the Porter family.