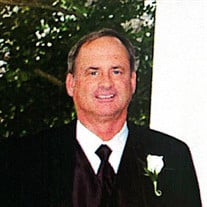 Ronnie “Ron” Myers, born on December 10, 1950, passed at 71 years old unexpectedly from a cardiac event on June 8, 2022. He was born and raised in Greeneville, TN but was currently residing in Palmetto, GA where he lived with his wife. Ron was a veteran of the United States Navy, serving in the Vietnam War. He was a graduate of ETSU, and attended South Greene High. Ron leaves behind his devoted wife of 50 years, Lovy Russell Myers (m. Jan 1, 1972) and his four daughters, Candace Myers (m. Chris), Erin Ashley (m. David), Jennie Myers, and Kelley McShea (m. Tom) as well as his eight grandchildren - Cassandra, Noah, Vincent, Jacob, Evelyn, Mark, Tara and James. Ron’s siblings Tammy Bunce and Steve Myers remain living in Greeneville. His other siblings Terry Arbuckle, Phil Myers and Lee Myers precede him in death as well as his parents Peggy and C.L. Myers Jr. He has nieces, nephews and cousins who remain living in TN and GA. Ron owned and operated M&S Auto Parts in Johnson City, TN for 10 years before moving to Georgia with his family and bravely began a new automotive business that he proudly ran as a successful entrepreneur until his passing. He lived in Peachtree City Georgia for many years pursuing his favorite pastime, golf, and he was able to play until his last day. He followed the Braves every season and was so happy to see them win the championship in 2021 & 1995. He and his wife, as empty nesters, enjoyed going to music concerts regularly and spending time with their pets, especially his loyal dog Harley. Ron was a loving father and husband, an attentive grandfather, who will be deeply missed by those he left behind. His memories and spirit will live on with them. A celebration of life will be planned in the coming weeks and shared with family and friends. In lieu of flowers please make a donation the animal institute https://www.facebook.com/LostPetRecoveryTeam/

Ronnie &#8220;Ron&#8221; Myers, born on December 10, 1950, passed at 71 years old unexpectedly from a cardiac event on June 8, 2022. He was born and raised in Greeneville, TN but was currently residing in Palmetto, GA where he lived with his... View Obituary & Service Information

The family of Ronnie "Ron" Myers created this Life Tributes page to make it easy to share your memories.

Send flowers to the Myers family.