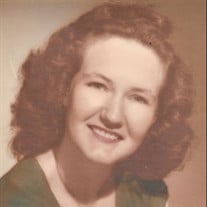 Sarah Watson, 92, of Union City, Georgia passed away peacefully on April 12, 2021 at Southwest Christian Care in Union City. Parrott Funeral Home in Fairburn will arrange a private graveside service at Forest Lawn Memorial Gardens in College Park, Georgia. Any floral memorials should be sent to Parrott Funeral Home. Sarah was born in Roopville, Georgia on April 28, 1928 to Buford and Carrie Burson. They moved to East Point in 1929. Sarah graduated from Russell High School in 1946. She met Jesse Watson, her true love and husband for 71 years, on a blind double date in 1948. They were accompanied by Zach and Emily Mathews on a visit to the Cyclorama outside the Atlanta Zoo. They were married on October 7, 1949. Sarah worked as a bookkeeper at Sears & Roebuck on Ponce de Leon Avenue in Atlanta immediately out of high school. After marrying Jesse, Sarah was a loving mother and homemaker. Through the years, they lived in Atlanta, Palmetto, Lithia Springs and Union City. She owned and operated the bait shop at Sweetwater Creek State Park from 1973 to 1978. Sarah enjoyed cooking for her family, putting up vegetables from the garden, tending her flower garden, volunteering as a Candy Striper at South Fulton Hospital and attending Friendship Baptist Church. She was a voracious reader and had a wicked sense of humor. Her greatest joy in life was taking care of her babies. She is preceded in death by her parents; brothers Henry Burson and Max Burson; and son William Robert (Bob). Sarah is survived by her loving husband, Jesse; son, Joseph (Mary) Watson of Muscadine, Alabama; daughter, Kathy Watson (Chris Callahan) of Decatur, Georgia; daughter-in-law, Paula Watson of McDonough, Georgia; grandchildren, Adam Watson, Amanda Falls, Stephanie Urrea, John Watson, Paul Watson and Mary Beth Watson; and great-grandchildren, June Falls, Hank Falls, Diego Urrea and Sophia Urrea. Donations to Southwest Christian Care in Union City (swchristiancare.org) are welcome in lieu of flowers.

The family of Sarah Watson created this Life Tributes page to make it easy to share your memories.

Send flowers to the Watson family.