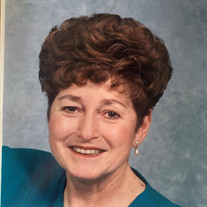 Mrs. Mary Sondra Wingo, 81, of Newnan, passed away Saturday, April 2, 2022 at her residence. She was born May 22, 1940, in Hoboken, Georgia to the late Robert and Ada Ammons. Sondra was a loving Mother, Grandmother, Sister and friend. She enjoyed doing crossword puzzles and was an active member of Ramah First Baptist Church in Palmetto, Georgia where she taught Sunday School, cooked Wednesday night dinners and directed Awanas and Vacation Bible School. She graduated Valedictorian from Hoboken High School and attended Georgia College and State University in Milledgeville on the Mumford Scholarship where she received her Bachelors of Art degree and was a member of the Pi Gamma Mu Sorority. Sondra earned her Masters in Library Science from Emory University. She worked as a Librarian at Campbell High School, Palmetto High School and Creekside High School until her retirement from Fulton County schools. She is survived by her husband, Jimmy Wingo; sons, Randy (Cathleen) Wingo of Canton, GA and Scott(Liz) Wingo of Newnan, GA; grandchildren, Zach, Rance, Whitley, Zed, Lily and Jack Wingo; sisters, Waunice Aldridge of Evans, GA, Patricia (Addison) Ball of Blacksburg, VA, Betty Clark of Brownsville, TX, Jane O’Steen of Hoboken, Ga; brother, Hamp Ammons of Hoboken, GA; and many nieces and nephews. The family would like to thank Ms. Brenda Pope and Ms. Sholanda Scott for the loving care given to Sondra in her final days. A funeral service will be held Tuesday, April 5, 2022 at 2 o’clock in the Chapel of Parrott Funeral Home with Charles Huckaby officiating. Interment will follow at Holly Hill Memorial Park. The family will receive friends two hours prior to the service at Parrott Funeral Home and Crematory in Fairburn, GA.

Mrs. Mary Sondra Wingo, 81, of Newnan, passed away Saturday, April 2, 2022 at her residence. She was born May 22, 1940, in Hoboken, Georgia to the late Robert and Ada Ammons. Sondra was a loving Mother, Grandmother, Sister and friend. She enjoyed... View Obituary & Service Information

The family of Sondra Wingo created this Life Tributes page to make it easy to share your memories.

Send flowers to the Wingo family.