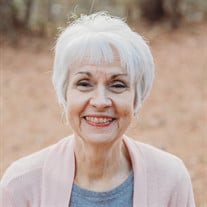 Vicki Kindt Huxford, 69, of Tyrone, Georgia, died Tuesday, August 24, after surviving two and a half years of treatment for pancreatic cancer. A native of St. Petersburg, Florida, Vicki graduated from Lakewood High School at the age of 16. She earned a bachelor’s degree from Point University (then Atlanta Christian College) and a master’s degree in sacred music with an emphasis in organ performance from Cincinnati Christian University. She was a talented musician who learned to play the organ before the piano, which she herself would have told you was the “wrong order.” She began playing for weddings and funerals as a teenager, and spent many years as a church musician — an organist, children’s choir director, and alto singer. In recent years, she enjoyed performing with and serving as president of the Masterworks Chorale in Newnan. She also taught music at her alma mater and in private lessons. Her intelligence drove her to do everything with excellence, including her work as an administrative professional, where she earned the highest certification in the field. Known for her sense of humor, Vicki was the queen of puns, always quick with a hilariously sarcastic remark. Even as her body began to fail her, that sense of humor remained intact. She loved the color purple, which she often said was “the best color.” It seemed fitting to her that purple is the color for pancreatic cancer awareness. Vicki’s heart was incredible — literally, as it kept fighting long after the cancer had taken so much else, and figuratively, as she went out of her way to love and care for others. Her home was open to everyone, especially college students — even if they needed a place to live for a while. She always had room at the dinner table for her daughters’ friends and boyfriends to join at the last minute. She baked and gave away hundreds of loaves of her signature comfort food, banana bread, made from her mother’s recipe. She spent countless hours cross-stitching birth records for the babies she knew, and she served as a bonus grandmother, lovingly called Gav, for more than a dozen children. She doted on her son-in-law and unofficially adopted son, treating them as if they were her own. Her quiet generosity was more extensive than most people ever knew. Vicki fiercely loved her daughters, who were her best friends. She enjoyed nothing more than spending time with her girls, and she did so often. She taught them to be strong and independent, to love learning, to sing in the car, and to always write thank-you notes. She was married for just over 48 years to the love of her life, Wye, whom she met in college. Though she always questioned the story, he really insists that he picked her out in the freshman registration line in college. He set the gold standard for the phrase, “smart boys marry up.” Most importantly, she was a faithful Christian. If Vicki said she was praying for you, she was — your name, in fact, was written on her list. She read through the entire Bible every year for decades. She trusted God with her whole heart, even through the worst days of her illness. She feared nothing, always drawing on the Lord for her strength. There is no doubt she is with her Savior. She is preceded in death by her loving parents, Earl and Nita Heptinstall Kindt, of St. Petersburg, and beloved in-laws, Wilder and Ellen Huxford, of Russellville, South Carolina. She is survived by her devoted husband, Samuel Wilder “Wye” Huxford III; daughter, Sarah Huxford, of Newnan; daughter and son-in-law, Bethany and Chad Davis, of Tyrone; adopted son, Austin Hunter, of Atlanta; sisters and brothers-in-law, Patti and Dennis Hindman, of Newnan, and Karen Kindt and Marty McDermott, also of Newnan; sisters- and brothers-in-law, Beth and Tommy Graham, of Russellville, Cathy and Brudy Wood, of Moncks Corner, South Carolina, Joe and Donna Huxford, of Chesapeake, Virginia, and Tim and Robin Huxford, of Russellville; and many nieces and nephews. The family will hold a private burial service due to COVID-19 concerns. A public memorial service will be planned at a later date, filled with the music she loved. In lieu of flowers, the family requests donations in her memory to Point University (www.point.edu/give) or the Pancreatic Cancer Action Network (www.pancan.org).

Vicki Kindt Huxford, 69, of Tyrone, Georgia, died Tuesday, August 24, after surviving two and a half years of treatment for pancreatic cancer. A native of St. Petersburg, Florida, Vicki graduated from Lakewood High School at the age of 16.... View Obituary & Service Information

The family of Vicki Huxford created this Life Tributes page to make it easy to share your memories.

Send flowers to the Huxford family.