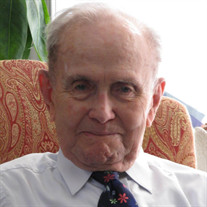 W. Craig Bryan of Fayetteville, Georgia, late of Athens, passed away on April 9, 2021. Born in Tucson, Arizona, Craig Bryan enrolled at the University of Arizona, attaining a graduate degree in Plant Pathology. While at the university, he played in the Wildcat Marching Band and gigged as a dance-band lead trumpet throughout southeast Arizona. Drafted into the U.S. Army in 1941, he served in the Pacific Theatre until 1945, then returned to Tucson to work for the U.S. Department of Agriculture. An appointment to the U.S. Forest Service Southeastern Experiment Station brought Craig Bryan and his family to Athens, Georgia in 1954. His research there centered on diseases of Southeastern forest trees and development of disease-resistant strains, and also on mentoring of graduate students in the University of Georgia School of Forestry. Upon retirement in 1979, he and wife Doris Burns Bryan traveled to Mexico, Canada, Hawaii, the British Isles, and the American West. With fellow Forest Service colleagues, he ventured into Alaska, camping and fishing on rafting trips down remote rivers. He relocated to Fayetteville, Georgia in December 2010, where he lived-out his next eleven years and joined North Fayette United Methodist Church. In November 1989, Craig was preceded in death by his wife, Doris Burns Bryan. A daughter, Jean Margaret Bryan, passed away in January 2012. Craig Bryan is survived by a daughter, Ellen (David) Harbarger of Lakewood, Ohio; a son, William (Kimberly) Bryan Jr. of Fayetteville, Georgia; four grandchildren, Danielle and David B. of Chicago, Illinois, and Craig and Brett of Atlanta and Fayetteville, respectively; and four great-grandchildren, Lily, Jack, Cash and Rex all of Chicago. A celebration of Craig Bryan's life will be held Wednesday, April 28, 2021, 2:00 pm at North Fayette United Methodist Church, 847 New Hope Road, Fayetteville, Georgia, 30214.

W. Craig Bryan of Fayetteville, Georgia, late of Athens, passed away on April 9, 2021. Born in Tucson, Arizona, Craig Bryan enrolled at the University of Arizona, attaining a graduate degree in Plant Pathology. While at the university, he... View Obituary & Service Information

The family of Mr. W. Craig Bryan created this Life Tributes page to make it easy to share your memories.

Send flowers to the Bryan family.