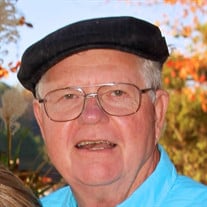 Harold Wayne Merideth, 77, died peacefully on August 19, 2021, in the early morning hours at his home in Newnan, Georgia from complications of his 13-year battle with Parkinson’s disease. Wayne Merideth was born in Amory, Mississippi on May 12, 1944, and spent his formative years in the northeastern Mississippi community of Monroe County. Graduating from Amory High School in 1962 with high academic honors and as a National Honor Society graduate, Wayne was the first in his family to attend college. Initially enrolling at Ittawamba Junior College in Fulton, Mississippi, for his undergraduate curriculum, Wayne completed his college studies at Mississippi State University in Starkville, Mississippi, graduating with a degree in Accounting in 1967, again with academic honors as a National Honor Society graduate. Following graduation, Wayne joined the Army National Guard, completing basic training at Fort Leonard Wood Army Base near St. Robert, Missouri, and received an honorable discharge from the military in 1971. Following graduation from college, Wayne worked for the Federal Government in Huntsville then moving to Georgia to accept a job as an auditor with the Federal Aviation Administration in College Park in January 1968, where he would work for 37-plus years in a variety of positions in auditing, accounting and payroll, before retiring as the Accounting Operations Manager in Atlanta’s FAA Regional Office in 2004. Under Wayne’s steady guidance, the FAA’s accounting and payroll departments saw significant expansions and improvements during his almost four-decades of leadership. Wayne was a true Southern gentleman in every sense of the word. Highly intelligent with a natural curiosity for life, possessing a keen wit and a quick smile, Wayne had an easy-going manner that instantly made others feel relaxed and at ease. A terrific conversationist, Wayne Merideth never met a stranger, and he had many friends both near and far. Wayne graciously gave his time and energy to all those around him, sharing his vast knowledge and life-experiences with others, and in so doing, enriching the lives of all those he met. With his beautiful heart and his kind, warm spirit, Wayne Merideth truly made a meaningful impact in the lives of all who knew him. Wayne was an avid traveler, visiting all 50 states, and several countries internationally, including Canada, Mexico, Ireland, Scotland, Great Britain, France, Belize and Italy. Wayne especially enjoyed both day-trips and extended vacations with his grandchildren, including trips to Washington, D.C., Boston, Chattanooga, Atlanta and Orlando. Wayne had a great love for his family, and constantly showed his affection for his family with frequent dinners, holiday traditions, and annual family vacations. Wayne Merideth was preceded in death by his parents, Mr. James Harold Merideth, and Ruth Chism Merideth, both of Amory, Mississippi. Wayne is survived by his wife, Linda Daniel Merideth; his daughter and son-in-law, Michele and James King of Newnan, Georgia; his daughter and son-in-law, Melissa and Frank Harper of Newnan; step-daughter and son-in-law, Caryn and Jason Johns of Newnan; step-son Eric Smith of Newnan; step-daughter Lori Smith of Columbus; step-daughter Joni Ashcraft of Columbus; six grandchildren, including Jansen Bridges, Merideth Harper, Jenna Bridges, William F. Harper, Jaxson Smith, and Zac Smith; five step grandchildren, Abbie Ashcraft, Chase Wayne Johns, Caleb Johns, Charys Hogeland and Katy Hogeland; sister Peggy Merideth Stevenson; sister Tressia Merideth Lane and husband Jeff Lane; nephews Jon Stevenson, Jeff Stevenson, Chase Smith and Michael Lane; and niece Jamie Stevenson. Parrot’s Funeral Home in Fairburn is in charge of arrangements. Due to concerns about Covid-19, the family has decided to hold a graveside service at Holly Hill Memorial Park in Fairburn, Georgia on Sunday, August 22nd at 1:00 p.m. In lieu of flowers, memorial contributions may be made to Sacred Journey Hospice, 138 Peach Drive, McDonough, GA 30253, or at www.sacredjourneyhospice.com. Online condolences may be made to the family at www.parrottfuneralhome.com.

Harold Wayne Merideth, 77, died peacefully on August 19, 2021, in the early morning hours at his home in Newnan, Georgia from complications of his 13-year battle with Parkinson&#8217;s disease. Wayne Merideth was born in Amory, Mississippi... View Obituary & Service Information

The family of Wayne Merideth created this Life Tributes page to make it easy to share your memories.

Send flowers to the Merideth family.