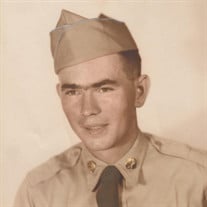 SGM William “Bill” Morris Curlee, US Army, Ret, age 93, of Tyrone, GA passed away Sunday, January 16, 2022 at his home. He is survived by his wife of 69 years, Reba Robinson Curlee of Tyrone, GA; daughters, Vicki Gardner and husband Tom, of Griffin, GA, Lanice Sudduth and husband Virgil, of McDonough, GA, Delores Dean and husband Gary, of Sharpsburg, GA; sons, Russell Curlee and wife, Lorraine of Elberton, GA, Bruce Curlee and wife Beth, of McDonough, GA; 17 grandchildren and 25 great-grandchildren. A funeral service will be held Friday, January 21, 2022 at 2pm at the Chapel of Parrott Funeral Home with Bishop Ben Johnson of the Church of Jesus Christ of Latter-Day Saints to officiate. Interment will follow at Holly Hill Memorial Park. Those wishing may sign the online guestbook at www.parrottfuneralhome.com. The family will receive friends on Friday January 21, 2022 at 1pm. at Parrott Funeral Home and Crematory, 770-964-4800. Bill was born in Shelby County, Alabama March 24, 1928 to Huett and Velma Curlee. He was the oldest of five children. As a youth he enjoyed farming, fishing, and hunting, and especially enjoyed playing pranks at school and on family, a trait he continued throughout his life. He tried three times to enlist in the US Army, finally succeeding in 1951. He served 20 years in the Army, with duty in the Pentagon, and tours in Japan, Korea, and Germany. He was proud of his country, the US Army, and all those that served. After retiring from the US Army, he worked another 20 years for Continental Can Company, and he made sure that his family only consumed sodas that were packaged in cans from Continental Can Company. In addition, he was a devoted member of the Church of Jesus Christ of Latter-Day Saints and served happily in the church for many years. His life-long passion was gardening and he spent many hours toiling to produce a beans, sweet potatoes, corn, and watermelon on granite infested red clay. And he loved it. And so did the many generations of deer that always seemed to manage to have a more abundant harvest than he did. He was especially fond of flowers of all kinds. To many he was known as a friend, a teacher, a mentor. He was a faithful son and brother, and a devoted husband, father, grandfather (PawPaw), and great grandfather.

The family of William "Bill" Curlee created this Life Tributes page to make it easy to share your memories.

Send flowers to the Curlee family.