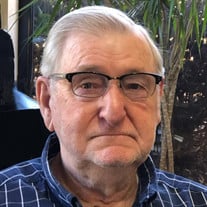 William Calvin Ellison transitioned from this life to the life eternal with his Lord on Friday, April 8, 2022. He passed peacefully at his home of 60 plus years, on the same property on Ellison Road in Tyrone, GA where he came into the world on February 19, 1936. Calvin was born to Ralph and Mamie Ellison of Tyrone, Ga and worked on the family farm before beginning a 40 plus year career as a machinist and welder. In 1960 he married his childhood friend Marie White of Fairburn, Ga. They raised three boys on the family farm, Johnny, Jimmy and Walt. Calvin and Marie were married 61 years at the time of Calvin’s passing. Calvin loved working with his hands. He had the reputation of being able to weld and repair any broken farm equipment. He was known for recycling medal before it was popular. His hobbies included bowling, playing cards with friends, playing church-league softball, smoking BBQ, attending country music concerts, and enjoying hosting family and friends in his home. He was a strong churchman and held multiple leadership positions in his home church, Hopewell Methodist in Tyrone, which his grandparents Samuel and Ella Ellison helped to start in the mid 1850’s. He loved spending time with his grandchildren, Will, Ben, John, Natalie, Addie and Amelia. He taught them about life and what it meant to live simply and faithfully. Calvin is survived by his wife Marie, his three sons Johnny (Jennifer), Jimmy (Beth), and Walt (Shelly) as well as his sisters Lucy Eleanor Ellison and Sandra (Gary) Hubbard. His six grandchildren and multiple nieces and nephews. The family would like to give a special thanks to Calvin’s caregivers during the final season of his life, Mr. West Hill, Ms. Carmen Smith and Sacred Journey Hospice Care. Services will be held Monday, April 11, 2022 at 2pm at Parrott Funeral Home. In lieu of flowers, family and friends can make a donation to either Restoration Atlanta (RATL.org) or the Alzheimer’s Association (ALZ.org).

William Calvin Ellison transitioned from this life to the life eternal with his Lord on Friday, April 8, 2022. He passed peacefully at his home of 60 plus years, on the same property on Ellison Road in Tyrone, GA where he came into the world... View Obituary & Service Information

The family of William Calvin Ellison created this Life Tributes page to make it easy to share your memories.

William Calvin Ellison transitioned from this life to the life...

Send flowers to the Ellison family.